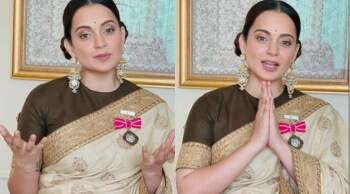 Mumbai: The statement received by Bollywood actress Kangana Ranaut in begging for the independence of the country has now turned into a big ruckus. In fact, since then many Netizens are demanding to get back the Padma Shri from him. At the same time, Kangana Ranaut has given another big statement to defend herself on the controversial statement.

Actually, Kangana Ranaut has written a post on Kangana in her Instagram story claiming that if she is proved wrong then she will return her Padma Shri herself.

Kangana has shared a book page on her Instagram story. On this page there are quotes of Aurobindo Ghosh, Bal Gangadhar Tilak and Bipin Chandra Pal, in which they have spoken about the Congress.

Kangana wrote in her Instagram story that in the same interview (interview given to the news channel), everything has been said very clearly. The first mass fight for independence began in 1857. Great people like Subhash Chandra Bose, Rani Laxmibai and Veer Savarkar ji made sacrifices throughout the battle. I know the battle of 1857, but which war was fought in 1947, I do not know. If anyone can tell me I will return my Padma Shri and also apologize…Please help me with this.

Read: – Kangana has made a big mess on social media, netizens are demanding to take back Padma Shri Award

He further wrote, “I have acted in the feature film of Martyr Veerangana Rani Laxmi Bai… The first war of independence was extensively researched on 1857… Along with nationalism the right wing also emerged… But why did it suddenly end? And why did Gandhi let Bhagat Singh die? Why was Netaji Bose killed and why did he never get Gandhiji’s support? Why did a white (British) draw the line of partition? Why did Indians kill each other instead of celebrating independence? Some answers I am seeking Please help me to find the answer.

As history goes, the British have looted India to the extent of ruin. During the Second World War, his living in India was also costing him in the conditions of poverty and enmity. But, he knew that he would not be able to leave India without paying the price for centuries of atrocities. He needed the help of Indians. Only a small fight with his Azad Hind Fauj could have given us freedom and Subhash Chandra Bose would have been the first Prime Minister of the country. Why was independence thrown in the bowl of Congress? When the right wing could take it by fighting. Can anyone help explain this?

Kangana further wrote that I am ready to face the consequences. As far as the independence in 2014 is concerned, I specifically said that we may have physical freedom, but India’s consciousness and conscience were freed in 2014.. For the first time not to speak English or in small towns. People can’t shame us for coming from India or using things made in India… in that same interview everything is clearly said… but those who are thieves, they will be burnt. No one can extinguish… Jai Hind.

Read: – When Kangana got freedom in 2014, Nawab Malik said that it seems that she was sitting with a heavy dose of hashish…