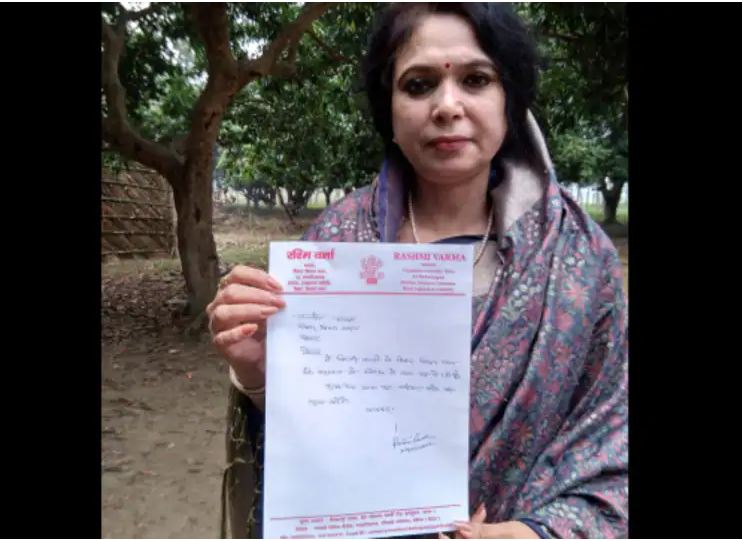 New Delhi. Rashmi Verma, BJP MLA from Bihar’s Narkatiaganj assembly seat, has resigned on Sunday. He has written in a letter addressed to the Speaker of the Bihar Legislature. She said that I am voluntarily resigning from the membership of Bihar Legislative Assembly due to personal reasons. Will you be pleased to accept my resignation letter.

Read :- UPTET Paper Leaked: Dr. Satish Dwivedi said – investigation handed over to UP STF, re-examination will be held within a month

Rashmi Verma has written the letter on the letter head of the MLA on 09 January 2022. His picture showing this letter is becoming increasingly viral on the Internet media. It is discussed that due to some family property dispute, there have been some cases against the MLA and his supporters in recent times. There is also a discussion about the pressure of a particular person to resign.

Let us inform that Rashmi Verma’s brother is an accused in the Uttar Pradesh Teacher Eligibility Test. Rashmi Verma has had a long political career. Rashmi Verma went to the BJP overnight from JDU in 2014 and became an MLA for nine months in the by-election on a BJP ticket. In the 2015 elections, if BJP did not give ticket, then independent went into the fray.

Then Rashmi Verma’s brother-in-law Vinay Verma won the election from here on a Congress ticket. He got 57 thousand 212 votes. Rashmi Verma, contesting as an independent, got 39 thousand 200 votes. BJP’s candidate Renu Devi got 41151 votes. Later again Rashmi Verma was made a candidate by BJP in the 2020 assembly elections. She was victorious. Now Rashmi Verma surprised everyone by resigning once again.

Read: – Corona Effect: UP Government postponed the UP TET 2020 exam till further orders