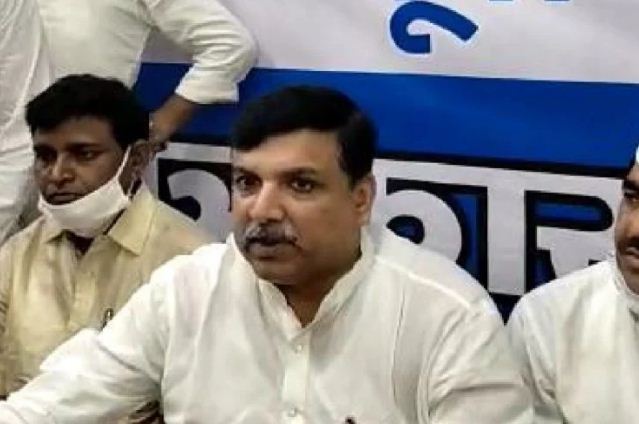 UP Elections 2022 : Aam Aadmi Party will field candidates on 403 seats in the UP Assembly elections. On Sunday, Aam Aadmi Party’s UP in-charge and Rajya Sabha member Sanjay Singh has released the first list of names of candidates contesting on 150 seats. Announcing the names of the candidates, Sanjay Singh said that the Aam Aadmi Party has entered the fray for the new politics of change in UP and to sweep the dirt of politics. He said that our party will contest all 403 seats in Uttar Pradesh to bring education, health, employment, agriculture as issues in the center of politics.

Read: – UP Elections 2022: Shivpal, said – every decision of Akhilesh approved, gave this advice to Aparna

Sanjay Singh said that good and deserving candidates have been fielded in the electoral fray. These include educated, doctors and engineer candidates by profession. He said that out of these, the selection of candidates for about 150 seats has been taken by our leaders at the Center under the leadership of Arvind Kejriwal. Out of which the first list of 150 candidates is being released by the Aam Aadmi Party. The list of remaining candidates will also be released soon.

Read: – UP Elections 2022: Big blow to Congress, Imran Masood will be riding a bicycle again after eight years

Read :- UP Elections 2022: BJP’s social army will prepare the election campaign, will play with WhatsApp group

These candidates will give competition to the veterans

Aadmi Party is contesting Pankaj Awana from Noida against BJP’s sitting MLA Pankaj Singh. Aam Aadmi Party has declared Vishnu Kumar Jaiswal as its candidate from Sirathu of Deputy Chief Minister Keshav Prasad Maurya. Rajiv Yadav has been pitted against Suresh Khanna in Shahjahanpur. Arvind Deshwal has been nominated from Thana Bhawan in Shamli. With this, Alok Dwivedi from Gosaiganj in Ayodhya, Harshvardhan from Milkipur in Ayodhya and Manoj Kumar Mishra from Rudauli assembly of Ayodhya have been given a chance.

Sanjay Singh said that we believe that the manifesto is what it is. This is our guarantee that’s why we have named it guarantee letter. We have formed a team for that and based on the suggestions from the public, we will come out with our best manifesto. We have promised five thousand rupees to the unemployed, 10 lakh jobs and one thousand rupees per month to the women above 18 years. Along with this, 300 units of electricity will also be given free.