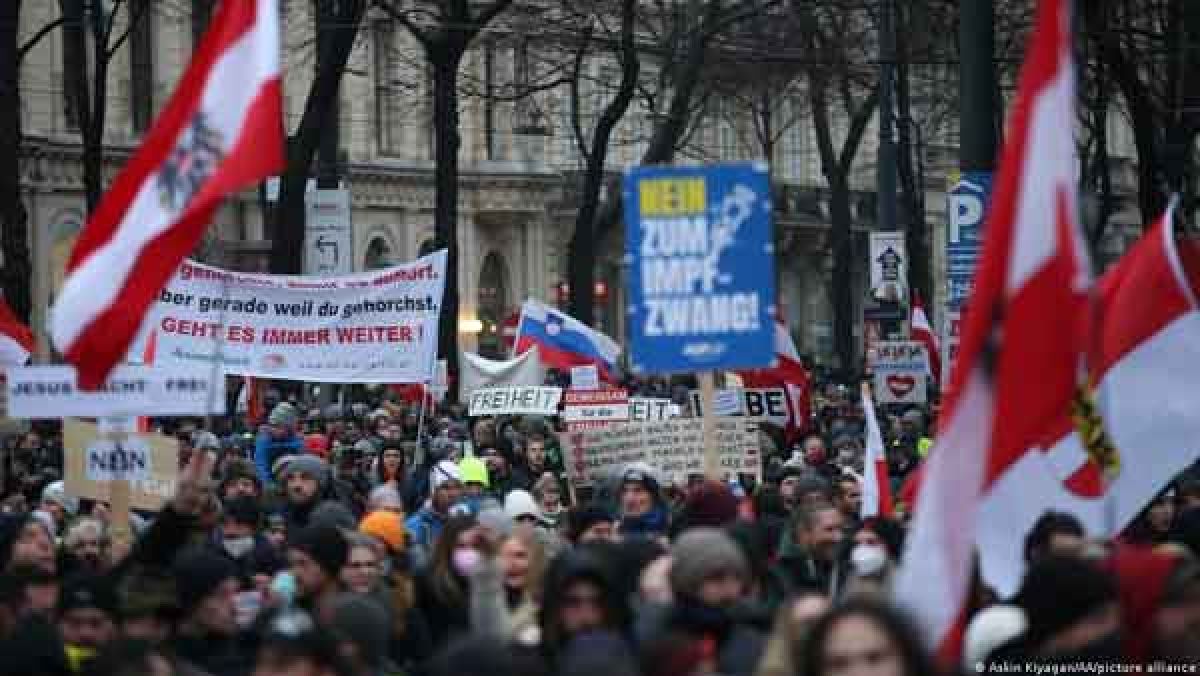 Austria, Jan 21: Austria’s parliament on Thursday passed a vaccine mandate that will require all adults in the country to get vaccinated against COVID-19 beginning in February. The move makes Austria the first EU country to pass a vaccine mandate, despite tens of thousands of angry citizens continuing to protest such measures in Austria and across Europe.

The law enjoyed broad support in parliament, with only far-right legislators voting against it in a 137-33 tally. After an “introductory phase” ending mid-March, those who refuse to get the shot will face fines of up to €3,600 ($4,084). The mandate only applies to adults and makes exemptions for pregnant women and those with medical conditions that prevent them from getting the jab.

Herbert Kickl, leader of the far-right Freedom Party of Austria (FPÖ) — which has also sought to win voters from those skeptical of coronavirus vaccines — railed against the law Thursday during the parliamentary debate, claiming it “paves the way to totalitarianism in Austria.” Kickl vowed that he would continue to personally refuse vaccination.

Center-right Chancellor Karl Nehammer, however, told reporters “Vaccination is an opportunity for our society to achieve lasting and continuous freedom, because the virus cannot restrict us any further.”

On Wednesday, the Austrian government announced it would set up “security zones” around health facilities and vaccination centers and that police would turn away anyone “causing trouble,” including demonstrators.

Austria, which has a population of around 9 million, has seen almost 14,000 COVID-related deaths and 1.5 million infections since the coronavirus pandemic began. Roughly 70% of the population is fully vaccinated.

Austria now joins Ecuador, Tajikistan, Turkmenistan, Indonesia and Micronesia as among the only countries in the world to have passed vaccine mandates.

Here’s the latest on coronavirus from across the globe:

Germany is witnessing a record high in daily coronavirus infections for a seventh day.

The country on Thursday reported 133,536 cases of COVID-19 as against 112,323 the previous day, data from the Robert Koch Institute (RKI) showed.

The seven-day incidence rate was also a record at 638.8 new infections per 100,000 people over seven days.

Germany has implemented tighter COVID-19 measures over the last few days, limiting access to bars and restaurants to those who have received their booster shots or people who are tested, along with already being fully vaccinated or recovered. Earlier this week, Health Minister Karl Lauterbach told German RTL broadcaster that he expected the current omicron-fueled wave to peak around the middle of February.

France is unveiling a timetable for easing COVID-19 restrictions, although the wave of omicron infections is not thought to have reached its peak.

Government spokesman Gabriel Attal said France’s new vaccine pass rules would help with the relaxations even as the incidence rate continues to increase.

France on Wednesday reported nearly half a million coronavirus infections — leaving the seven-day average at 320,000 cases.

However, the number of COVID patients in intensive care has stabilized, allowing some room for manoeuver.

“It’s going to be with us for many, many years, perhaps forever, and we have to learn to live with it,” he said on Thursday.

Javid’s remarks come after the British Prime Minister Boris Johnson announced that rules on face masks in schools had been scrapped and the requirement to wear face-coverings on public transport and in shops will end next week.

He intended to drop self-isolation rules for people with coronavirus in March.

“I think we are leading Europe in the transition from pandemic to endemic and we’re leading the way in showing the world how you can live with COVID,” Javid said.

The Russian capital, Moscow, has reported a record number of new coronavirus infections over 24 hours, according to a government tally.

The figures come as Russia — one of the worst-hit countries in the world by the virus — prepares for a fresh wave of cases due to the omicron variant.

Russia as a whole recorded 38,850 new cases Thursday, a figure edging towards its previous record set in November last year.

Africa’s top public health bodies called for donated COVID-19 vaccines to come with a shelf life of three to six months so countries could plan their distribution.

The director of the Africa Centres for Disease Control and Prevention, John Nkengasong, said 2.8 million vaccine doses had expired on the continent.

He added that most expired doses were donated through the global vaccine-sharing scheme COVAX and arrived with “very short notice.”

Many countries indicate that they would like vaccines to be donated with at least three months of shelf life, if not more,” the World Health Organisation Regional Director for Africa, Matshidiso Moeti, said.

New Zealand has ruled out lockdowns but will tighten coronavirus measures across the country if there is a domestic transmission of the omicron variant, Prime Minister Jacinda Arden said on Thursday.

The nation will impose a “red” traffic light protocol within 24 to 48 hours of omicron arriving in the community, Ardern told reporters.

The measure would make masks mandatory and put caps on public gatherings.

“When we have evidence of Omicron transmitting in the community we won’t use lockdowns, instead the whole country will move into Red within 24 to 48 hours,” Ardern said.

“We know from other countries it can take as little as 14 days for omicron cases to grow from the hundreds into the thousands,” she said.

“It’s a case of when not if, and that’s why we need to prepare,” she said.

The isolated nation has so far remained mostly free of the omicron variant, with most such cases contained in its border facilities.

In China, Beijing is bolstering anti-pandemic measures amid a rise in local cases.

The measures include inspections of its cold-chain firms and urging residents to avoid unnecessary gatherings.

The city of 21 million people has registered under ten local infections since January 15. It reported 3 domestically transmitted infections with confirmed symptoms on Wednesday. However, officials are eager to keep the pandemic in check as the Chinese capital prepares to host the Winter Olympics in February.

In Taiwan, people will have to prove that they are fully vaccinated to get into entertainment venues from Friday.

More than 70% of people in Taiwan have received two vaccine doses but only around 10% have had their third shot so far.

The new COVID-19 case count in Mexico reached a daily record with over 60,000 infections on Wednesday, according to official numbers.

The health ministry registered a total of 60,552 new coronavirus infections, the most since the pandemic began, as the country gears up for an omicron-fueled fourth wave.

Due to a shortage of tests, authorities are asking people to isolate at home rather than get tested for COVID-19.