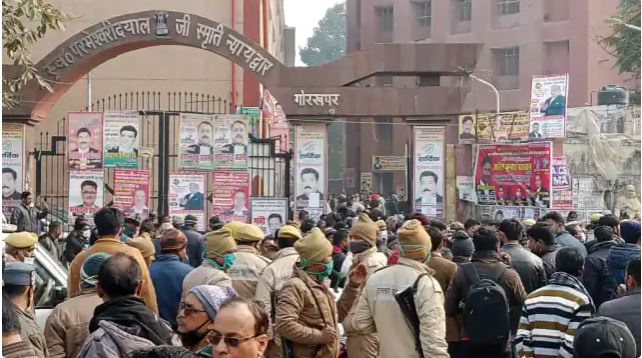 Gorakhpur. The father of the victim, accused of raping a minor, was shot dead by the victim’s father at the civil court gate in Gorakhpur district on Friday afternoon. The police has arrested the attacker in this case. The name of the person killed is being told as Dilshad Hussain. According to the information received, he was a resident of Bihar. According to the police, the father of the victim girl has killed her. Police has arrested him.

The lawyers present there have been enraged by this sensational murder at the Gorakhpur Kacheri Gate. They are raising questions about the security system of the court. According to eyewitnesses, Dilshad Hussain had come to meet a lawyer in the court. During this, he was shot at the main gate of the court. It is alleged that during this time some policemen were present on the spot, who ran away as soon as the bullet was fired. A man has been arrested after the murder. It is being told that he is the father of the victim girl.

During this, the police who reached the spot also had an argument with the lawyers. People were accusing the policemen present at the time of the incident of running away. While the lawyers are raising the question of the security arrangement of the court premises.