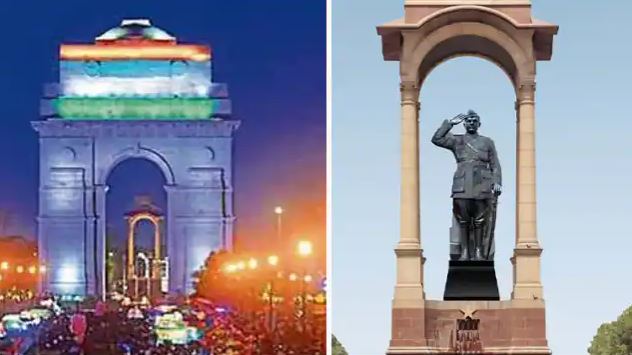 UP Election 2022: Ever since the Election Commission has announced the dates for the assembly elections, all the parties are busy in campaigning for the elections and at the same time they are seen giving different assurances to the people. In such a situation, Prime Minister Narendra Modi said in a tweet that on the 125th birth anniversary of Netaji Subhas Chandra Bose, a statue made of granite will be installed at India Gate. But it will take time to make an idol. So till then his Holigram idol will be installed at the same place.

The flame of the torch of Amar Jawan Jyoti built at India Gate will go off from today. This torch will be merged with the flame of the National War Memorial in a program organized on Friday. Due to which the opposition has fiercely attacked the BJP government. In such a situation, Prime Minister Narendra Modi has announced to install a statue made of granite at India Gate on the 125th birth anniversary of Subhas Chandra Bose. The PM himself has given this information through a tweet. It will take some time to make a statue made of granite. Till then a Holigram statue will be installed at that place and at the same time the Prime Minister said that this statue will be a symbol of India’s indebtedness to him.

At a time when the entire nation is marking the 125th birth anniversary of Netaji Subhas Chandra Bose, I am glad to share that his grand statue, made of granite, will be installed at India Gate. This would be a symbol of India’s indebtedness to him. pic.twitter.com/dafCbxFclK

Congress gave assurance to the youth

In this sequence, the manifesto titled Recruitment Vidhan for the youth of UP for the Uttar Pradesh Assembly Election 2022 was released on Friday at the Congress Headquarters. After this, the party’s national general secretary Priyanka Gandhi Vadra said that an examination calendar will be issued, in which recruitment advertisement, examination, dates of appointment will be recorded and strict action will be taken if it is violated. There will be social justice supervisors for every recruitment to stop the scam of reservation. Priyanka Gandhi said that to make this recruitment legislation, our leaders and workers talked to the youth all over UP and asked about their problems. This recruitment legislation has emerged from those discussions.