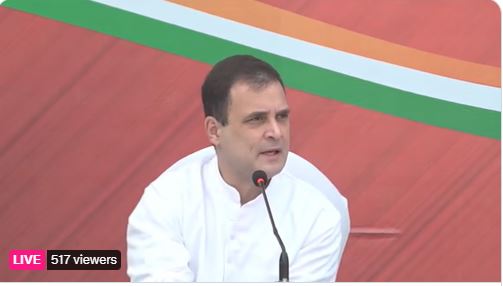 UP Election 2022 : The manifesto titled ‘Recruitment Vidhan’ for the youth of UP for the 2022 Uttar Pradesh Assembly elections was released on Friday at the Congress headquarters in New Delhi. After this, former national president of the party, Rahul Gandhi said that the party has talked to the youth of UP to make this manifesto. In this their aspirations have been put in it. The Prime Minister had said that we will give two crore jobs annually to the youth of the country, but you know what is happening.

Rahul Gandhi said that the thinking of the party is that there are no hollow words for the future of the youth of UP, how will we get you employment. This is what we have written in this manifesto. He said that we believe that India needs a new vision. The vision presented by BJP in 2014 has completely failed. Today only the people of BJP are saying that something is wrong somewhere.

LIVE- We issue the manifesto of justice, progress and equal rights for UP.#congress recruitment_legislation https://t.co/TL03OwZP0f

Rahul Gandhi said that UP was in the central role in the struggle against the British. Today the youth of the country and the state need a new vision. Only Congress can give this. BJP cannot give this vision. You have created the highest unemployment in 40 years so it is bad. Compare the economic condition of the country or the states with the tenure of other parties during the time of Congress. Our track record has always been good. We are trying to take that better forward.

Rahul Gandhi said that such a large number of people have lost employment because of demonetisation, wrong GST and corona lockdown. Congress can never do such things. The aim of the BJP is to bring a monopoly in this country where the back of all small businesses should be broken and handed over to the four-six capitalists. Congress party will not allow this to happen. Small small businesses are the power of UP, we want to revive them.