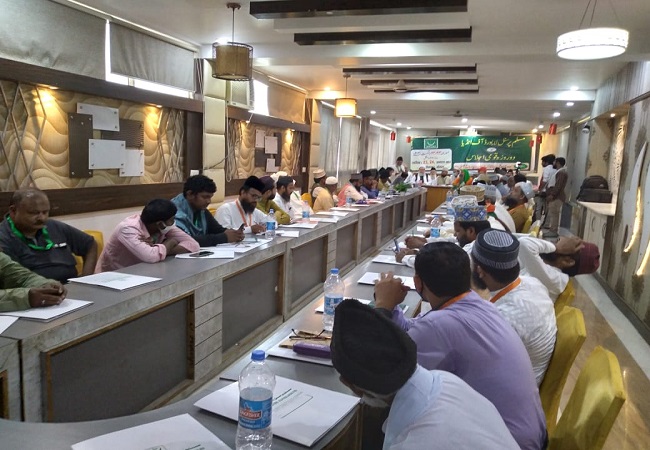 Lucknow :71 years of independence have passed, Muslims have seen many important milestones in the journey of independent India. Despite this, the situation of Muslims has not changed even today, nor are they living their issues with a dream in their eyes. Samajwadi Party, Bahujan Samaj Party or Congress are not worried about where and in what condition the Muslims of the country are standing today after so many years, that is why there are no future plans for the Muslim community in their agenda. Nor is it ready to discuss their issues, it is not even ready to share the stage with the Muslim leaders of its parties, it wants votes in bulk under the guise of anti-Muslim politics of the Bharatiya Janata Party, but to talk on the issues of Muslims. This was said in a statement issued after the meeting of the National Core Committee of the Muslim Personal Law Board of India.

Board’s National President Maulana Yusuf Azizi and National General Secretary Dr. Moeen Ahmed Khan said in a statement issued after the meeting that SP, BSP, Congress, who make big claims of secularism, are still silent on the issues of Muslim community, anti-BJP politics and power. The strong contenders, Akhilesh, Priyanka, Mayawati are not ready to tell what their vision is for the Muslim community.

The position of the above parties has become such that SP, BSP, Congress are shying away from sharing the platform to the Muslim leaders of their party, but the claim on the vote is 100% that it should vote for us against the BJP but do not talk on the issues. The core committee of the party believes that like the Bharatiya Janata Party, the SP, BSP Congress is raising the issues of the Forward, Backward Depressed Classes in the election campaign, but has kept completely silent on the Muslims.

The Muslim Personal Law Board of India is not ready to talk about the issues of the Muslim community in the Uttar Pradesh Legislative Assembly elections, the explanation of why this is happening should be given to the three parties and their leaders. Concerned for the good and there is something in their agenda, then they should announce it and guarantee that they will make strict laws to prevent the killings of Muslims through mob lynching, education, health, employment and minority communities along with the protection of Waqf property. Constitutional institutions set up to protect the rights of the people, including other government institutions, will give full participation in proportion to the population with full freedom to work for the benefit of the community.

Board’s Chief Spokesperson Riyazuddin Bakho and National Vice President Sufi Ajmeri said that the Muslim community, who are victims of BJP’s anti-Muslim politics, should understand that we have many options. Will call the meeting and take the final decision.