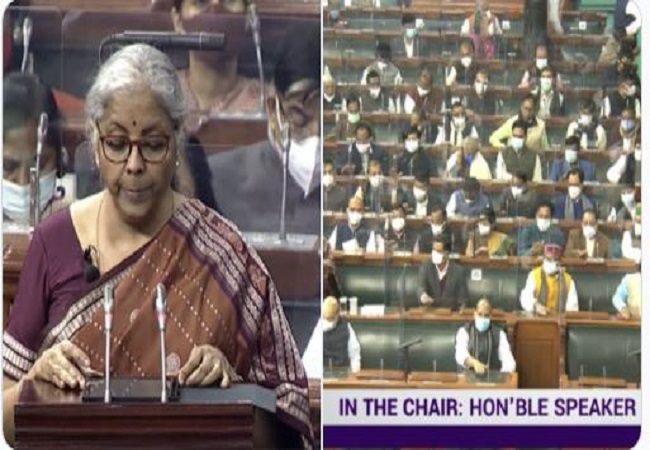 New Delhi. Finance Minister Nirmala Sitharaman is presenting her fourth budget in Parliament on Tuesday. Presenting the budget for the financial year 2022-23, Finance Minister Nirmala Sitharaman said that development has been encouraged in this budget. Along with this, the intention of the government has been shown in this budget.

Know the big things of the budget

Nirmala Sitharaman said, since 2014, our government is engaged in empowering the poor and marginalized people.

Corona is battling a wave, but our economy is emerging rapidly.

India’s economic growth is estimated to be 9.2 percent in the coming financial year.

60 lakh new jobs will be created.

The scheme will be started in PPP mode to increase the income of the farmers.

25000 km highway in 1 year, 20 thousand crore rupees will be spent on highway expansion.

Read :- Budget 2022 Live: Finance Minister Nirmala Sitharaman presented the budget for 2022-23, said – it has a foundation of 25 years

8 new ropeways will be constructed.

400 new generation Vande Bharat trains will be run in 3 years.

5 rivers will be linked.

100 PM Gati Shakti Cargo Terminal to be developed in the next 3 years.

80 lakh houses will be built under PM Awas Yojana.

Three new schemes will be brought for women power.

E-passports will be issued.

Finance Minister made this big announcement for farmers

Record shopping will be done at MSP.

Year 2023 declared as the year of coarse cereals.

The government will work towards increasing the production of oilseeds.

The government’s emphasis will be on organic farming.

Farmers will get digital service.

Read :- Union Budget 2022: Know when, where and how you can watch Nirmala Sitharaman’s budget speech live

Emphasis will be laid on increasing irrigation and drinking water facilities.

Chemical free natural farming will be promoted across the country with focus on farmers’ land in 5 km wide corridors along the banks of river Ganga.

Railways will develop efficient logistics for small farmers and enterprises.

One station, one product scheme will be launched to increase the supply chain of local produce.

Agri University will be promoted.

Expansion of ‘One Class, One TV Channel’

Under PM e Vidya program ‘One Class, One TV Channel’ will be expanded. Under this, it will be expanded from 12 to 200 TV channels. In all states, children between the ages of one and 12 years will be able to get education in their own language.